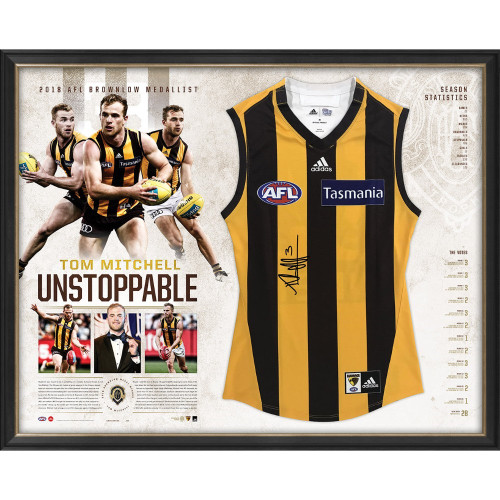 Congratulations to Hawthorn mid-field star Tom Mitchell on a stellar 2018 season capped off by becoming only Hawthorn’s sixth ever Brownlow Medallist. Widely regarded as the premier disposal getter in the game with a side-step and delivery to match Mitchell has continued to develop new dimensions to his game in only his 2nd year at Hawthorn. Awarded his second All-Australian blazer in as many years and the prized award as the AFL's Most Valuable Player Mitchell became the first player in VFL/AFL history to collect 50-plus disposals in a match multiple times in a season. He had 40-plus touched 11 times to finish the home and away season with 786 disposals  - one short of the record he set in his first year with Hawthorn in 2017.

HawksNest in conjunction with the Australian Football League is pleased to release the Tom Mitchell Signed Brownlow Guernsey Display -  ‘UNSTOPPABLE’.

Personally signed and officially licensed it is a must have for all Hawthorn fans and astute collectors alike but act fast stock is strictly limited!

$79 VIP Delivery to Melbourne Metro area all other country/interstate areas additional delivery charges will apply. HawksNest will contact the purchaser to inform of any additional fee.