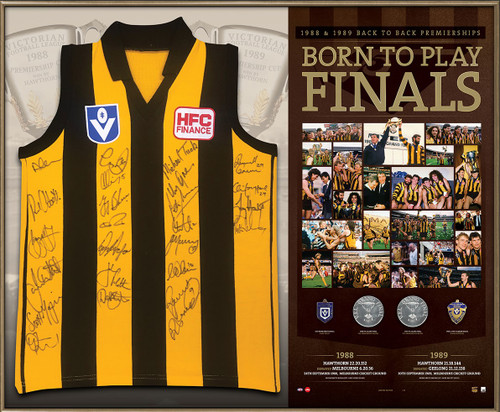 The Hawthorn Football Club is one of the most successful sporting organisations in the last 60 years winning 13 premierships gaining and retaining a membership of over 80 000 and establishing itself as a financial powerhouse an exceptional achievement from such humble beginnings.

Our greatest era was arguably the 1980s when the team won four premierships and played in the grand final seven years in succession including three in a row against arch-enemy Essendon. The decade started poorly with Hawthorn failing to finish in the top five (as it was then known) and seen by most critics as a spent force. Coach David Parkin left and agreed to coach Carlton and captain Don Scott would shortly retire after playing his 300th game. In a surprise appointment Hawthorn persuaded former St Kilda premiership coach Allan Jeans to coach the team. Jeans had not coached in the VFL for five years.

Ill health to coach Allan Jeans meant that Alan Joyce took the coaching position for 1988. The Hawks lost only 3 games for the year; Coleman Medalist Jason Dunstall kicked 132 goals and the team would win the 1988 Premiership 22.20 (152) against Melbourne 6.20 (56); a then-record margin in a Grand Final of 96 points. Gary Ayres won his second Norm Smith Medal.

The 1989 season was viewed as one of the most spectacular VFL/AFL seasons to date; with Dunstall again kicking a century of goals the resurgence of Geelong and dominating play of Geelong great Gary Ablett Sr. and the greatest grand final of the modern era occurring in this year.

The Hawks defeated Geelong in the 1989 Grand Final. The match is now legendary for its amazing toughness physicality skill massive scoring and tension. The Hawks jumped out to an enormous lead as Geelong attempted to unsettle the Hawks through rough physical play. However the physical toll on the Hawks began to show as the match wore on; with John Platten being concussed  Robert DiPierdomenico puncturing his lung Dermott Brereton breaking his ribs and Michael Tuck splitting the webbing on his hand. By midway through the final quarter the Cats were charging; with Hawthorn desperately trying to hold off the Cats' avalanche of goals while containing the brilliance of Ablett who ended the match with a grand final record of 9 goals. Hawthorn's experience and determination allowed them to hold off Geelong just long enough scraping through to victory by one goal.

Countless amounts of preparation sacrifice and hard work by the playing group coaches and support staff made this feat achievable.

Hawthorn Football Club in conjunction with the AFL are proud to release 'Born to Play Finals' - Framed Guernsey . This magnificent signed guernsey display pays the ultimate tribute to Hawthorn’s 'Back to Back' achievement of 1988 & 1989. Personally signed by all 24 players from both premierships  'Born to Play Finals' - Framed Guernsey is limited to just 89 editions worldwide coming officially licensed and endorsed by the AFL and AFLPA for your peace of mind.

This small quantity won’t last long – secure yours now before they run out.

Postage is $89 to all Melbourne Metro areas all other country/interstate areas additional delivery charges will apply. HawksNest will contact the purchaser to inform of any additional fee. This product is excluded from the $150 Free Postage promotion due to weight and dimensions. Deliveries and collections from HawksNest Waverley Park are available on request. PO Box addresses are not accepted.

Hawthorn Women's Fleece Back Tights made by COTTON:ON