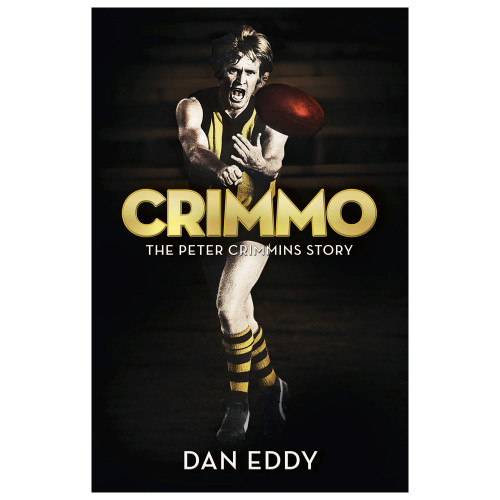 Peter Crimmins was small in stature, but his presence loomed large at Hawthorn during his 176 games (1966-75). A tenacious rover and popular captain who helped establish the Hawks as a powerhouse in the Victorian (now Australian) Football League, the cheeky, blond-headed Crimmins was widely acclaimed as the most courageous player in the game. ‘Crimmo’ was a standout in Hawthorn’s victorious 1971 Grand Final victory over St Kilda; his dominant on-ball partnership with the legendary Leigh Matthews during that period was as dynamic as any the game had seen. But it was Crimmins’ off-field courage which endeared him to fans of all clubs. Appointed captain for 1974 he would play all but one game in the premiership season but missed Hawthorn’s finals campaign after he had a cancerous testicle removed. He returned to lead the team in 1975, before cancer again forced him to step away from the game. Undetered he made a valiant quest to be selected for the 1975 Grand Final. Hawthorn’s decision to overlook their skipper for that match remains the most controversial selection call in football history. Crimmins’s health deteriorated during 1976, yet he fought gamely to the end. After the Hawks secured the 1976 Premiership, Clive Mackinnon’s award-winning photograph of the gravely ill Crimmins surrounded by his jubilant teammates is one of the most emotive ever captured. Days later, Crimmins was dead. He was just 28. Having left behind wife Gwen (then 31), and sons Ben (4) and Sam (2), the outpouring of grief that followed was unprecedented for a footballer to that time. It was no surprise that Crimmins has been immortalisedat Hawthorn, with the club champion winning the Peter Crimmins Medal. In Crimmo: the Peter Crimmins story, Dan Eddy, with complete access to family records, describes Crimmins’ remarkable impact on his club, his teammates and Australian football.

ABOUT THE AUTHOR: Crimmo: The Story of Peter Crimmins is Dan Eddy’s sixth book in an expanding collection of works that bring to life the history of Australian Football. His highly acclaimed biography on Essendon legend Dick Reynolds (King Richard, Slattery Media 2014) intimately examined the impact the triple Brownlow Medallist had on the game, and in ‘Crimmo’ he has once again captured the essence of one of football’s most popular figures. Eddy, whose 2019 PhD explored the remarkable background of Carlton legend Alex Jesaulenko, has also written Larrikins & Legends, Skills of Australian Football, Always Striving and The Norm Smith Medallists, and has co-written six other books including The Shinboners (multiple authors) and The Will to Fly (with Lydia Lassila). Eddy lives in Leongatha with his son Ernie.