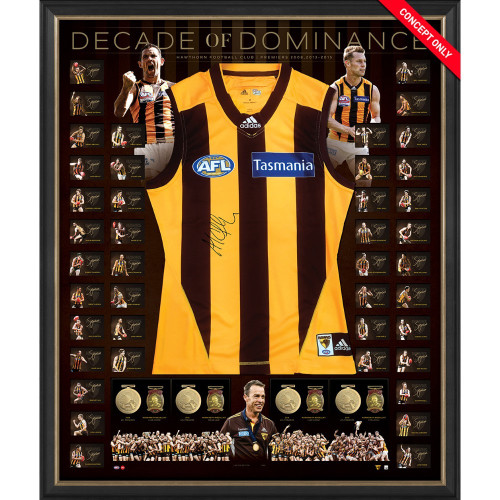 Alastair Clarkson’s men have irrefutably stamped themselves as one of the most dominant sides in AFL history. Led by their revolutionary coach, 2008 marked the beginning of a decade of dominance as a young Hawks side defied all expectations to pull off one of the greatest Grand Final upsets in history. In front of 100,000+ fans and inspirationally led by a young back-man by the name of Luke Hodge, the Hawks managed to take down the seemingly invincible Geelong in grand fashion.

The hunt for a three-peat has stumped some of history’s greatest outfits. But these Hawks were different. Clarkson, through the develop astute and incredibly successful tactics, was able to coach his chargers onto one of the game’s most lucrative lists. Their incredible three-peat from 2013-15 saw Luke Hodge morph into one of the great leaders, Sam Mitchell into a prestigious midfielder, Josh Gibson became one of the competitions best defenders and Cyril Rioli into one of the more electrifying forwards in recent memory. For any other club, the pressure of winning three Premierships in a row would have been too much to handle – thankfully, these Hawks weren’t like any others.

Hawthorn Football Club, in conjunction with the AFL, are proud to release 'Decade of Dominance'. This magnificent signed guernsey display pays the ultimate tribute to Hawthorn’s four Premierships through the decade of 2008-18. Personally signed by all 42 Premiership players and coach Alastair Clarkson, Decade of Dominance is limited to just 42 editions worldwide, coming officially licensed and endorsed by the AFL and AFLPA for your peace of mind. This small quantity won’t last long – secure yours now before they run out.