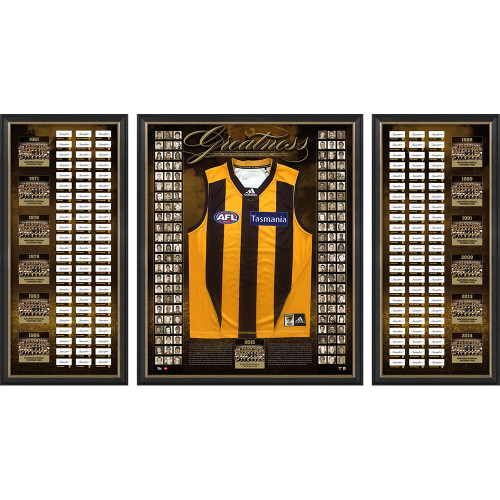 The Hawks dished out a lesson for the ages in conquering the West Coast Eagles by 46 points – a margin that flattened the much-hyped Eagles – and securing a spot in folklore with a third consecutive Premiership the club’s 13th overall.

Jack Gunston and Isaac Smith brushed aside injury fears from earlier in the finals campaign to run the Eagles ragged across the forward flanks. Ben Stratton Josh Gibson Brian Lake and Hawks newcomer James Frawley were all but impenetrable in defence. The midfield magicians Sam Mitchell Luke Hodge and Shaun Burgoyne were both courageous and fluent. And then there was Cyril Rioli. His name echoed around the mighty MCG every time he sliced apart the Eagles with pace sleight of hand and sheer athleticism. Hawk fans revelled in his unrivalled teamwork and his goals that split open the contest early and then witnessed history as "Junior Boy" followed in the footsteps of his legendary uncles Maurice Rioli and Michael Long in winning the Norm Smith Medal.

But this was a day to celebrate the brown and gold unit rather than individual heroes – and rarely has a team looked as imperious as these hat-trick champions.

The most impressive memorabilia piece ever commissioned by the Hawthorn Football Club at the time of 2015 Grand Final. This piece honours the players that have given their blood sweat and tears to achieve a record breaking thirteen premierships in the last 54 years.  This is unlikely to ever be repeated and represents an unique chance to secure such a significant piece with a limited edition of just 15 units.

Hawthorn Football Club in conjunction with the AFL is pleased to release ‘Greatness’ the ultimate tribute to the Hawks’ phenomenal record of sustained Premiership success in the modern era. Presented in a deluxe tri-panel display featuring the pe signatures of all 138 Hawthorn Premiership players* that have represented the club in our 13 VFL/AFL premierships and is strictly limited to just 15 editions this piece is a must-have for not only Hawthorn fans but astute memorabilia collectors Australia-wide.

VIP delivery is $149 to all Melbourne Metro areas all other country/interstate areas additional delivery charges will apply. HawksNest will contact the purchaser to inform of any additional fee. This product is excluded from the $150 Free Postage promotion due to weight and dimensions. Deliveries and collections from HawksNest Waverley Park are available on request. PO Box addresses are not accepted.